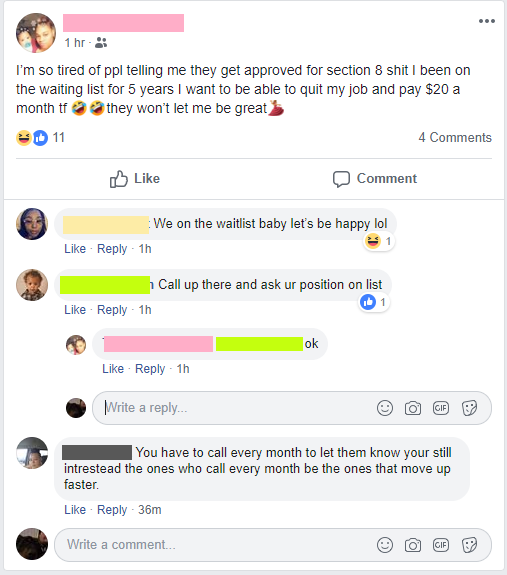 In January of 2005, I accepted a position as New Contracts Specialist with the contractor for the Section 8 Program of the Shreveport, Louisiana Housing Authority. Under the Section 8 Program, vouchers are given to low income citizens to provide rental assistance for qualified units of the recipient’s choice. On those numerous occasions when circumstances or policies were irrational and bizarre, my supervisor would often remark, “That’s why they call it Section 8”. She was, of course, referring to the infamous Section 8 military discharge issued to those who were deemed mentally unstable. By the time I left the program, I was convinced that she was right; the Section 8 Housing Program is inherently unstable, irrational and ineffective. I found ten basic symptoms of insanity in the Program which must be addressed to cure the patient’s illness.

First, it is just plain crazy to address the problem of poverty with a program that encourages poverty. Studies have documented that a major risk factor for poverty is having children with no father in the household earning an income. The average Section 8 recipient in Shreveport is a healthy black woman in her 20’s with one or more children (usually several) with no father present in the household and no earned income. I had many clients younger than 30 with 6 or more children. What could be more insane than to spend millions of dollars annually on a program which does nothing to alleviate the root causes of poverty? While there are incentive programs to help recipients achieve self sufficiency, these programs are not mandatory and are successful in very few cases. In the meantime, young women are enabled to enslave themselves in poverty and raise future generations in the same chains.

This is the Section 8 Housing Program, right? You would expect the purpose of such a program to be quality housing at affordable houses. That would be sane thinking. While there are several new apartment complexes in Shreveport accepting Section 8 Vouchers, most of the recipients in this program are housed in older, dilapidated houses. While there is an inspection process, sane housing standards were left behind in implementing safety inspections. The contractor was ordered by the local Housing Authority to pass any dwelling with holes in the wall smaller than a man’s fist. Is this crazy or what? Housekeeping standards are not enforced and landlords have to sue for damages to property. There is no tenant training on how to maintain a rental unit, or the tenant’s responsibilities to the landlord. I had one client express surprise that she could be evicted for not paying her portion of the rent. This means that only those landlords who cannot find conventional tenants will accept Section 8 Vouchers. Why should taxpayers subsidize slum lords? How is that assisting those of low income? Crazy, isn’t it?

It is only rational and logical that an entity receiving Federal funds must conduct itself impartially. If partiality were shown because of race or connection to the agency, it might even be a civil rights violation; so any sane agency official would be sure that partiality would never be shown. But in the crazy, zany world of the Housing Authority, Housing Vouchers are like free concert tickets. They can be awarded to friends, family, fellow church members. And of course some landlords are treated differently from other landlords. Simply ignore the fact that this is Federal money; act like it’s yours. Only if you are crazy.

One of the craziest things was actually my job. I did not work for the Housing Authority, but for a contracting private company hired to run the Section 8 Voucher Program. When funds are so tight anyway, why hire a Middle Man who must make a profit in order to survive? This almost guarantees that maintaining numbers will be what is top priority in the management of the program. Subcontracting puts another layer between the policy and the public and another place for incompetence to hide, so if you have a loony bin mentality it might make a crazy kind of sense, but never in a sane world where it is understood that every dollar must be carefully spent.

I found it mentally disturbing that housing vouchers were distributed with little being required from recipients. Yes, they were required to sign an agreement to keep certain rules such as maintaining the unit in good condition, not engaging in illegal activity, and paying their rent on time. But no attempt was made to enforce these behaviors or to teach recipients how to handle money, get a job or in any way provide for themselves. Most of my clients viewed Section 8 monies as an entitlement they could count on for life. It is irrational thinking to simply throw money at people and not assist them to become productive citizens. No sane person would do it.

I do not have a college degree; only about three years of college. However, I was more educated than my supervisor. Even the staff with college degrees were paid no more than myself – a beginning salary of $6.50 an hour, with no benefits.. As one co-worker put it, many receptionists make more than that. We had much more responsibility and stress than a receptionist We were given no formal training in interviewing skills or how to discover and deal with tenant or landlord violations. We worked in a volatile and sometimes dangerous atmosphere without the most rudimentary safety or security rules. It is absolutely crazy to implement policy using people who are not prepared or compensated properly for their job. It is like sending soldiers to war with no weapons; it is doomed to fail. Not sane at all.

Every sane person knows that in order to succeed at anything, you must have vision. There must be a plan. While every Section 8 Program is required to have an Administrative Plan in place, my office did not even know where it was and was not very happy that I even asked to see it. No procedures were in place for catastrophic situations like Hurricane Katrina or emergency housing needs for current voucher holders who experienced such situations as a house fire. Even when rules or guidelines were in place, they were frequently ignored. The most common answer I ever got to a procedural question was, “I don’t know”. That was also the answer I got when asking who would know the answer. This is enough to make you crazy.

If you made residents of insane asylums bankers, you would get the kind of funding policies found at the Housing Program. An official at the Shreveport Housing Authority drew criticism for using monies set aside for special programs to pay for an employee’s relative’s funeral. During Katrina, the contracting company was paid a stipend for each Katrina evacuee which they assisted. Part of that money was to pay for transportation to and from Shreveport, temporary housing and assistance in locating units to rent. In order to make this stipend more profitable, evacuees were sent to shelters (the point of Section 8 referral was to get them out of shelters) and shunted to the most readily available units, usually the cheapest and in poorest condition as quickly as possible. Since the Section 8 program is all about tenant choice of units, obviously the program officials were not really trying to aid evacuees, just put money in their pocket. When it was necessary to get good publicity, however, money would be wasted just to make the contracting company look good. Yes, insane asylum financing.

Last, but not least, it is insane to allow any government program to become a form of institutional racism and sexism. Since the majority of clients are African American women, an inefficient program without a vision is inherently racist and sexist. Ignored inefficiency and lack of vision in such a program eventually becomes a deliberate attempt to hold back the progress of blacks and women to become productive and self sufficient. A program designed to help the disenfranchised actually holding them back? That is just crazy!

To be fair, not all of these conditions exist at all Housing Authorities and there may be some localities where the Section 8 Program is run in an effective and honest manner. Still these problems are pervasive enough to be a national problem. Where these problems are prevalent, where common sense and sane thinking are missing, that is indeed why they call it Section 8.